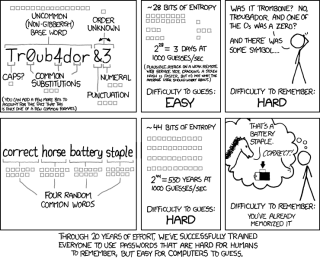 A long password is, generally, more secure than a complicated one.

According to GRC’s Search Space Calculator…

“%n7yP!zza” can be cracked in under 2 hours.
“ilikepeasandcarrots” takes around 2.53 thousand centuries.
Include spaces, and it leaps to 7.66 hundred million trillion centuries.

I know this is a gross oversimplification of factors that can influence a password’s guess-ability, such as entropy. But in almost all cases, password length contributes more significantly to overall password strength than complexity (see also Password Strength at xkcd).

I’ve mentioned KeePass and LastPass elsewhere, but if you’re not already using a password manager I highly suggest giving one of those two a go.